Texas remained largely rural until World War II, with cattle ranching, oil, and agriculture as its main industries. Contrary to popular mythology, cattle ranching was never Texas's chief industry. Before the oil boom, back to the period of the first anglo settlers, this was cotton farming (as in most of the South). 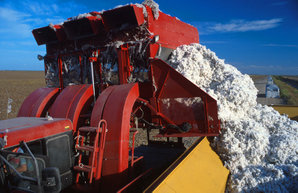 In 1926 San Antonio had over 120,000 people, the largest population of any city in Texas. After World War II, Texas became increasingly industralized.

Its economy (circa 2000) relies largely on information technology, oil and natural gas, energy exploration and energy trading, agriculture, and manufacturing. The state has two major economic centers: the Greater Houston area and the Dallas/Fort Worth Metroplex. Houston stands at the center of the petrochemical and biomedical research trades while Dallas functions as the center of the agricultural and information technology labor market in Texas. Other major cities include San Antonio, Austin, Brownsville, Lubbock, Amarillo, Abilene, Beaumont, McAllen, Tyler, Odessa and Midland. Other important cities include Killeen, home to Fort Hood the largest military Post in the U.S., El Paso, Eagle Pass, and Laredo; these have particular significance due to their location on the border with Mexico, making them important trade points.

The state passed New York in the 1990s to become the second-largest U.S. state in population (after California). In 2001 Texas had a gross state product of $764 billion. Texas's growth is often attributed to the availability of jobs, the low cost of housing (housing values in the Dallas and Houston areas, while generally rising, have not risen at the astronomical rates of other areas such as San Francisco), the lack of a personal state income tax, low taxation of business, limited government (the state legislature of Texas meets only once every two years), and favorable climate.

Texas is one of the top filmmaking states in the United States, just after California and New York. More than $1.2 billion has been spent in Texas just for filming since 1990.

The Texas Film Commission was founded for free services to filmmakers, from location research to traveling.