Texas can claim that "Six Flags" have flown over its soil: the Fleur-de-lis of France, and the national flags of Spain, Mexico, the Republic of Texas, the United States of America and the Confederate States of America.

Native American tribes that once lived inside the boundaries of present-day Texas include Apache, Atakapan, Bidai, Caddo, Comanche, Cherokee, Kiowa, Tonkawa, and Wichita. Currently, there are three federally recognized Native American tribes which reside in Texas: the Alabama-Coushatta Tribes of Texas, the Kickapoo Traditional Tribe of Texas, and the Ysleta Del Sur Pueblo of Texas.

On November 6, 1528 shipwrecked Spanish conquistador Álvar Núñez Cabeza de Vaca became the first known European to set foot on Texas. A member of the Narváez expedition, he was later enslaved by a Native American tribe of the upper Gulf coast, and explored what are now the U.S. states of Texas, New Mexico and Arizona on foot from coastal Louisiana to Sinaloa, Mexico, over a period of roughly six years. He returned to Europe in 1537, where he wrote about his experiences in a work called La relación ("The Tale"). 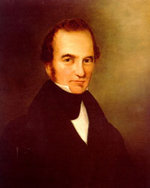 Prior to 1821, Texas was part of the Spanish colony of New Spain. After Mexican independence in 1821, Texas became part of Mexico and in 1824 became the northern section of Coahuila y Tejas. On 3 January 1823, Stephen F. Austin began a colony of 300 American families along the Brazos River in present-day Fort Bend County and Brazoria County, centered primarily in the area of what is now Sugar Land. This group became known as the "Old Three Hundred." The "Conventions" of 1832 and 1833 responded to rising unrest at the policies of the ruling Mexican government. Policies that most irritated the Texians included the Mexican ban on slavery, the forcible disarmament of Texian settlers, and the expulsion of illegal immigrants from the United States of America. The example of the Centralista forces' suppression of dissidents in Zacatecas also inspired fear of the Mexican government.

On March 2, 1836, the "Convention of 1836" signed the Texas "Declaration of Independence," declaring Texas an independent nation. On April 21, 1836 the Texians won their independence when they defeated the Mexican forces of Santa Anna at the Battle of San Jacinto. Santa Anna himself passed into captivity, and on May 14, Republic of Texas officials and General Santa Anna signed the treaty of Velasco. The Republic of Texas included all the area now included in the state of Texas, although its self-proclaimed western and northwestern borders extended as far west as Santa Fe and as far northwest as present-day Wyoming, respectively. 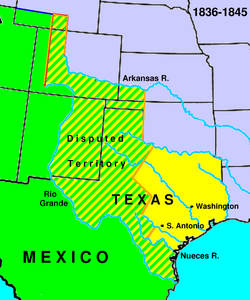 In 1845, Texas was admitted to the United States as a constituent state of the Union. Annexation was mutually beneficial to Texas and the United States. Texas was in a very susceptible position following independence, with a weak government, little industry, and minimal infrastructure. The U.S. could not allow such a tenuous nation to sit right on its border. Texas also lay partially in the way of the U.S. expansion to the Pacific, and its "Manifest Destiny." The major stumbling block of annexation, besides the potential for war with Mexico, was the fact that Texas was a slave state and potentially would tip the balance between free and slave states due to its huge size. Some southerners were pushing for the ability to divide Texas into multiple states, thereby increasing the number of slave states even more. A compromise was reached in that if Texas were divided, any states north of the Missouri Compromise would be free states.

During the Civil War, Texas seceded from the Union and joined the Confederate States of America. In 1870, the United States Congress readmitted Texas into the Union.

Texas today is a state thoroughly steeped in tradition, yet equally embracing of new social and technological developments. From the state capital of Austin (also headquarters of Dell Computers and known as "Silicon Hills") to the cosmopolitan air of Dallas, to the oil-and-finance rich industry of Houston to the Latinesque cultures of San Antonio and El Paso, the state tourism slogan truly fits: "Texas: It's like a whole other country."